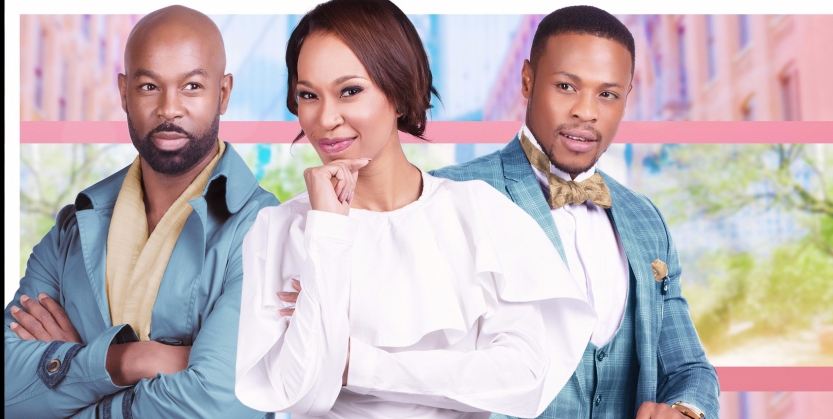 This week I had a blast watching the Zulu Wedding, a South African feature film about a young Zulu woman who leaves the country to pursue a new life and career in America, attempting  to free herself from the cultural and traditional obligations she is pre-destined to fulfil. Only to be pulled back home by the very tradition she spent close to ten years avoiding.

The film script is built on the all too familiar American romantic comedy formula with echoes of South Africa’s favourite prankster Leon Schuster, the popular 80’s American franchise  Police Academy, Soweto Green, Sex and the City including the 1980’s mini-series of Shaka Zulu with  whiffs of the early local ( South African Black) drama series such as Mopheme,  Bophelo Kesempego and Kukhala Nyonini.  It’s a romcom done the mzansi way. A mash-up of everything.

We first meet our protagonist dancer, Lu (Luyanda) Sabata, played by Nondumiso Tembe,  living a happy go-lucky life in New York. Her life resembles that of Carey Bradshaw, the main character in Sex and the City, particularly her outlandish dress- sense and party going lifestyle.

After being relentlessly pursued by a kind hearted New Yorker, Tex;  a romantic debonair who sends her Protea flowers for each birthday he missed after they first meet – reminiscent of a similar scene in a 1996 American romantic drama Bed of Roses. They fall in love and we discover that Lu (28) is a virgin who is saving herself for marriage.

Predictably, Tex proposes and Lu accepts without informing him that she is bound by a family debt to marry someone from the Zulu Royal family. She makes a feeble attempt to elope to Las Vegas with Tex after he brings her Sotho Uncle to New York to celebrate their engagement.

She enlists her uncle to help her pay her debt in cash so that she can be free to marry Tex without him knowing of her previous engagement.  He agrees and they all fly back to South Africa where preparations for Lobola negotiations and the wedding unfold dramatically between Zebras and Elephants Leon Chuster style.  Some of  my personal favourite scenes  include the lobola negotiations at Lu’s home where the-would-be groom is excluded from the conversation while a century-old friendly rivalry between the Sothos and the Zulus takes place with abandon. Even Former President Jacob Zumas’ favourite slogan mshiniwam makes a comical appearance. The drunken friend and Lu’s  sister keep you in the chair anticipating the next outrageous comedic act. The supporting cast in this movie is superb and they keep the comedy however slapstick flowing.

The obvious product placement and adverts for Capitec Bank and Liberty Insurance which were weaved into the story line were distracting. They pulled one out of the moment at times making the movie feel less like a  film.  A testament to the financial difficulties which plagued the film’s production causing its release date to be postponed three times in the past two years. Capitec and Liberty saved the day but they made sure that the audience didn’t forget where the money came from.  I couldn’t help but recall the words of a  Portuguese Dictator  Marcello Caetano when he said “the blacks are to be organised and enclosed in an economy directed by whites”.  Anyway.

The acting made up for it and the story line did offer up some moving moments and drama with a few rather empty shots of the Durban beach front and harbour. The story ends at the “royal” Zulu Kraal reminiscent of scenes from Shaka Zulu the mini-series, where wedding celebrations take place with the all too familiar favourite, the African “step” dance move making an appearance behind the credits.

I found myself watching this movie in an empty cinema with child-like eyes. I wanted to be completely open to the creative  process without injecting too much cynicism. I did this in order to recapture some of the joy and enthusiasm I found from  watching films since childhood.

Being open allowed me to enjoy the film much more than I expected to. The music score sent me traveling back in time and swaying my hips with my mind. I enjoyed most of it and found myself laughing out loud and sniffing discreetly.

It is a feel good movie whose underlying theme of identity and a desire to belong ( to someone, something or somewhere) along with a contradictory need be free to create and be without being chained to the past resonated with the itinerant in me.

I especially enjoyed the last bit of the movie in which the Zulu King actually listened to Lu’s side of the story.  An (ordinary)  woman pleading her case in the royal courts is unheard of in Zulu custom. Women are fined for speaking-out in general, much less speaking directly to the King.

No, the movie is not an ode to feminism. There are a few patriarchal tropes littered throughout the film which some politically sensitive “woke” viewers might find offensive. It’s not about that. What it does show, however, is the subtle and unspoken enigmatic power women can have over men even as they bow their heads in submission, since the days of Senzangakhona.

Something else I appreciated about the Zulu Wedding is  its full black cast and the fact that it is suitable to watch by the whole family. I remember a time when my parents who love movies struggled to find films with an all black cast which were not too violent, sexual or demeaning of  the black race.  Those films were extremely rare back then which meant we watched a lot of cartoons or watched the same movies on repeat. Today my nephews and nieces will have a variety of movies affirming their blackness to choose from.

That’s something to smile about, don’t you think?